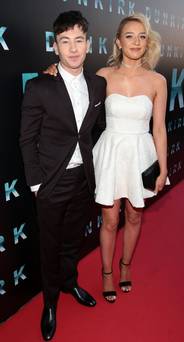 After a whirlwind year on the big screen, Irish actor Barry Keoghan has been named as one of Hollywood's top rising stars aged under 35.

Film industry bible The Hollywood Reporter has included the Dubliner on its list of up-and-coming talent who look poised to be the next big things.

It has been a stellar year for Barry, who appeared alongside Harry Styles and Cillian Murphy in the war drama Dunkirk and opposite Colin Farrell and Nicole Kidman in The Killing Of A Sacred Deer.

The 25-year-old, who found fame as cat killer Wayne on Love/Hate, was frank with the publication about why he decided to become an actor.

The honour comes not long after the actor was featured on Variety's 10 Actors To Watch list for 2017.

Barry has his eye on several big names in the industry and cited Martin Scorsese and Leonardo DiCaprio as two people he would love to work with.

He will next be seen in the famine drama Black 47 with Sarah Greene and Moe Dunford, and he will also star in the crime feature American Animals.

Barry was given advice by his co-star and compatriot Colin Farrell on how to cope with finding fame at a young age, and said he will always be in touch with his roots.

"He did tell me that stuff can go mental when you're young and everything is happening for you, but he thinks I've a good head on my shoulders," said Barry.

"Colin knows that I'm aware of the dangers and that I can see the fine line between films and reality.

"I'm always in touch with where I'm from," he added.

"I did Christmas plays at school but they banned me because I was messing about," he said.