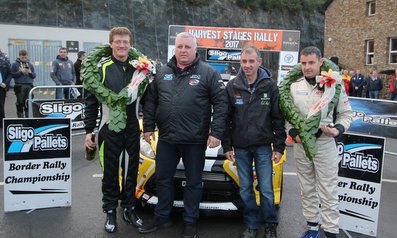 The crew drove their Ford Fiesta WRC to a first ever win in Donegal, taking the victory by just over a minute.

Donegal's Joe McGonigle and Ciaran Geaney were second in the Skoda while the top two wheel drive car was Ryan Loughran and Brendan McElhinney.

Highland's Oisin Kelly spoke to the top 3 crews at the finish ramp in Marble Hill...