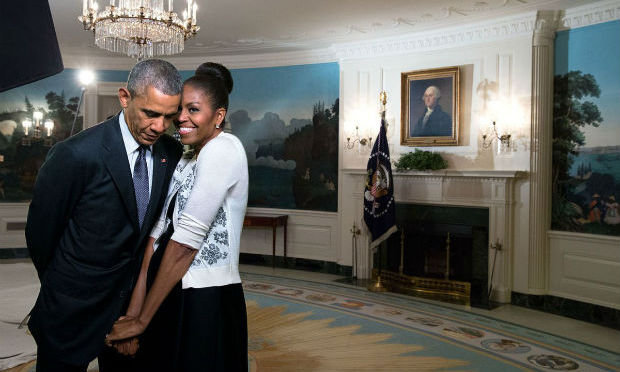 Barack still talks to her like they just met and he can't believe his luck. Goals.

Barack Obama paid tribute to his wife Michelle on their 25th wedding anniversary with a surprise video message as she talked with Shonda Rhimes at the Pennsylvania Conference for Women in Philadelphia and by God if it's not the sweetest thing.

"I had to crash this party because today we have been married for 25 years," he began. "The idea that you would put up with me for a quarter of a century is a remarkable testament to what a saintly, wonderful, patient person you are."

"It was a lot easier for me to do it," he continued, "because the fact of the matter is that not only have you been an extraordinary partner, not only have you been a great friend, somebody who could always make me laugh, somebody who would always make sure that I was following what I thought was right, but you have also been an example to our daughters and to the entire country."

Speaking at the conference about her time in the White House, Michelle said it was like "being shot out of a cannon and no time to think about feelings."

"Living in the White House is kind of what everyone else is doing," she continued. "Juggling careers, trying to be relevant, trying to make sure your marriage is intact and kids are healthy - but doing it under harshest, brightest light there is."