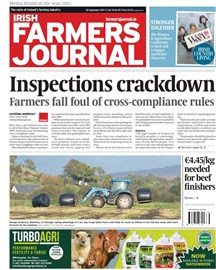 An inspection crackdown has resulted in 28% of Donegal farmers inspected losing money under the basic payment scheme.

Figures from the Department of Agriculture show that nationally, almost 60% of farmers inspected fell foul of one or more cross-compliance rules in 2016.

More than half of those farmers were forced to pay a penalty from their BPS.

December 1, 2020
Met Eireann is warning of much colder spells for the rest of the week. It has issued an advisory warning for the entire country, warning...