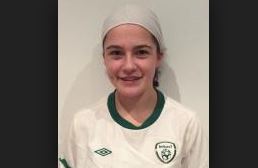 Donegal’s Amy Boyle Carr, who plays for Sion Swifts, came on as a substitute in the second half as the Republic of Ireland Women’s Under-17 side were beaten 1-0 by the Czech Republic in their latest outing.

Substitute Klara Cvrckova scored the only goal of the game in the second-half to seal the victory for the hosts with the second game between the two sides on Saturday.