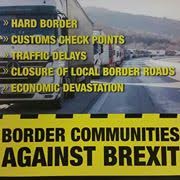 Border Communities Against Brexit has responded to proposals put forward by the British Government in relation to the Irish border.

The lobby group says the proposals are very poorly thought out, and deeply flawed.

The group is urging the Irish Government to press for the EU border to be placed in the Irish Sea.

The group, set up following Britain's vote to leave the EU, says over the past two decades, Ireland has become a thriving economy and reshaped itself to become an all island entity with the threat of a new border putting businesses in jeopardy.

The lobby group fears once proposals come to fruition there will be no say in EU regulations created in the future and no place in the global market place.

Calls have now been made to the Irish Government to continue work in arguing against the British Governments proposals and to secure a special case status for Ireland.
.