Having remained relatively silent on the matter of his return to probably the biggest movie franchise of his career, Daniel Craig finally confirmed that he'll be returning as James Bond one last time for the 25th Bond film, currently slated for November 2019.

Appearing on 'The Late Show with Stephen Colbert' last night to promote 'Logan Lucky', Craig admitted that he'd spent much of the past day and week doing press dodging the question of his return as 007, saying "We've been discussing it, we've just been trying to figure things out. I always wanted to, I needed a break."

He then added an apology for lying to so many people that day, saying: "I have to apologize to all the people I've done interviews with today, because I wanted to tell you." 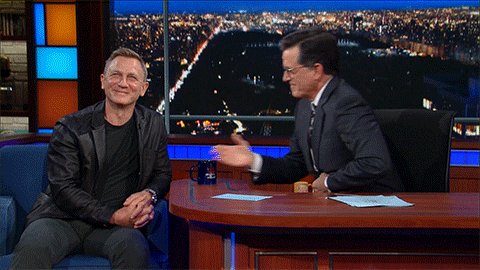 When asked by Colbert about the whole "rather slash my wrists than be Bond again" quote, Craig said: "There's no point making excuses about it, but it was two days after I had finished shooting the last movie and I went straight to an interview where someone asked, 'Would you do another one?' and I went, 'No!'"

After confirming the news, Colbert asked Craig if this was his final outing as 007, asking: "So is this the last Bond? Can you tell me if you’re going to do the one after that?"

You can watch Craig be as coy and teasing in the buildup to the reveal below.