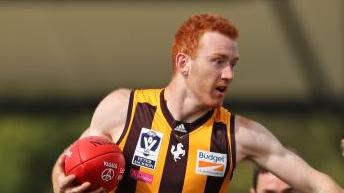 Derry teenager Conor Glass is set to make his AFL debut for Hawthorn on Saturday.

He's been picked in the Hawks' matchday 22 for their match against the Dockers at Domain Stadium.

Glass captained the Oak Leaf County's minors to Ulster success in 2015 before being drafted as an international rookie by Hawthorn.

He says Saturday will be a huge moment in his career...