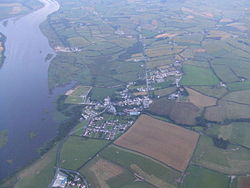 Donegal County Council says a pollution incident has been confirmed in St Johnston.

Following reports from a member of the public, cattle slurry was detected in the St. Johnston Burn, as it passed through the village.

Council staff and Fisheries Officers from the Lough’s Agency traced the source of the polluting matter to a farm approximately 8km upstream of the village, where the release of an unknown quantity of slurry had occurred the previous day.

Lough’s Agency Fisheries Officers have confirmed that a significant quantity of dead juvenile fish have been found in the lower section of the Burn, as it discharges into the River Foyle.

The Lough’s Agency and Donegal County Council say they will continue to work closely to monitor the discharge point source and water-course over the coming days and weeks, and pursue enforcement action as appropriate

This incident has highlighted the importance for farmers and contractors to take extreme care to avoid the discharge of slurry and contaminated water into water-courses, during what is a very busy time for them.

The council says any accidental discharges should be reported to the Council and either the Lough’s Agency or Inland Fisheries Ireland. The importance of early and effective intervention by the farmer / contractor and state agencies can help to reduce the impact of such discharges on the fish population and the environment in general.

Donegal County Council is not in a position to add any further comment at this point in time.