Whether Dwayne Johnson is seriously thinking of running for President of the USA or not, it would seem that people out there legitimately want him to.

The idea of him running first came up in a GQ interview. When asked if he’d consider putting his name in the hat for the 2020 election, he answered he “think[s] it’s a real possibility”, and sure looking at the fact that a celebrity was essentially elected as the US President, why the heck not?

A few weeks later, Johnson was asked about whether he was serious on Jimmy Kimmel, to which The Rock replied that was intrigued by the idea and that he believes he could be a relatable, caring President, but "three-and-a-half years is a long ways away." He also joked about running for President on the season finale on Saturday Night Live in May, saying Tom Hanks was going to be his VP candidate.

Now, according to The Hill (via Rolling Stone), a campaign committee has formally filed to draft Johnson for president. “Run the Rock 2020,” the name of the official organization, was filed on behalf of Johnson (though it is not officially tied to the actor and former WWE superstar) with the Federal Election Commission (FEC) on Sunday to make him eligible for the 2020 election.

The paperwork was filed by a man named Kenton Tilford under a West Virginia address. Tilford's connection to Johnson and his motivation for filing the organization is not clear. Then again, maybe he just really believes Johnson could be an awesome President. 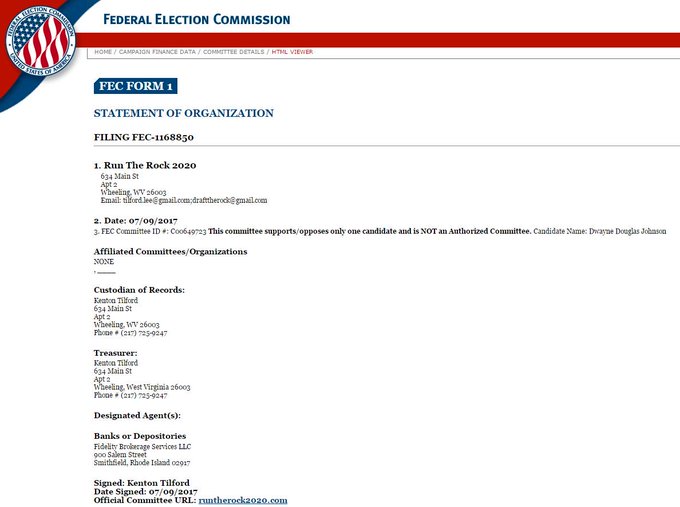