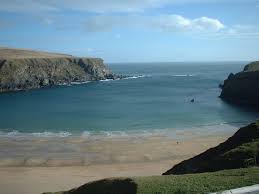 Two men whose bodies were recovered yesterday may have experienced difficulty while fishing at sea in the same area about a month ago.

Locals believe the two who lost their lives off Glencolmcille, Co. Donegal, were rescued around the same spot four weeks ago. The weekend tragedy happened after a 56-year-old married man from Oldcastle, Co. Meath, and a 40-year-old from Co. Longford sailed from Teelin Pier on Saturday.

Gardai said both are Lithuanians and have lived in Ireland for some time.

The 56-year-old’s body was found washed up on rocks by a man and his child at Malinbeg around 10.30 yesterday morning. The victim was named locally as Rimantis Barauskas, from Oldcastle, a regular visitor to the Glencolmcille area.

The second man’s body was later spotted at sea by Coastguard Rescue helicopter 118 from Sligo and lifted out of the water by the crew of Bundoran lifeboat. The body washed ashore wasn’t wearing a lifejacket. There was a lifejacket on the second body and there were two inflatable jackets on the boat.

Rescuers and local fishermen identified the boat, a five-metre rigid inflatable as identical to one on which four people were rescued when it ran out of fuel within the past month in the same area, Rathlin O’Beirne Sound between Rathlin O’Beirne Island and the mainland.

The two bodies were removed to the morgue at Letterkenny University Hospital where a post mortem examination will be conducted today.

The Divisional Controller with the Irish Coast Guard is John Draper. He says they're still trying to determine what happened on the water............