With twenty three Grand Slam singles titles to her name, it's hard not to refer to Serena Williams as one of the greatest players to ever play the sport of tennis. If not the greatest.

And yet, there are still people that think Williams couldn't compete with the male athletes in her sport. One such person is of former Men's Number One John McEnroe.

According to the 58 year old retired tennis star, were Serena to play on the men's circuit she would be ranked "like 700 in the world."

In an interview with NPR to promote his new  book "But Seriously", McEnroe claimed that Williams is the greatest female tennis player in the world. 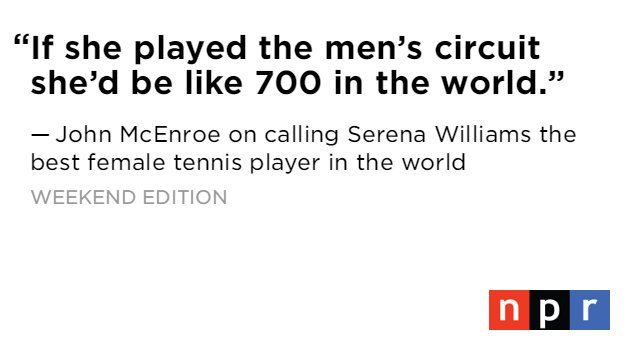 When quizzed about why he felt the need to say 'female tennis player', McEnroe said "Well because if she was in, if she played the men's circuit she'd be like 700 in the world,"

"That doesn't mean I don't think Serena is an incredible player." McEnroe continued. "I do, but the reality of what would happen would be I think something that perhaps it'd be a little higher, perhaps it'd be a little lower. And on a given day, Serena could beat some players. I believe because she's so incredibly strong mentally that she could overcome some situations where players would choke 'cause she's been in it so many times, so many situations at Wimbledon, The U.S. Open, etc. But if she had to just play the circuit — the men's circuit — that would be an entirely different story."

There were some (many actually) who disagreed with McEnroe's theory.

Fact: Serena Williams is the greatest tennis player of all time. Yes, she's greater than Roger and Rafa. Accepting that won't kill you.

Serena Williams is a Top 10 athlete. Gender should be irrelevant to the discussion. She dominates her competition at an insanely high level.

Let John McEnroe win a major while he is literally creating new human life inside his evil body and then he can talk about Serena Williams. https://twitter.com/AngryBlackLady/status/879422308800020480 …

Williams herself got wind of McEnroe's remarks and respectfully asked the former Wimbledon winner to stop talking about her.

Dear John, I adore and respect you but please please keep me out of your statements that are not factually based.

I've never played anyone ranked "there" nor do I have time. Respect me and my privacy as I'm trying to have a baby. Good day sir

December 2, 2020
The need for further development of tourism in East Donegal has been highlighted once again. Councillor Patrick McGowan told Donegal County Council this week that...