Housing Minister Simon Coveney has officially launched his bid to become the next leader of Fine Gael.

Standing outside the party's HQ in the last few minutes he said he wanted to heal the divisions that have opened in Ireland over the last decade.

He's also unveiled his election posters and is filing his nomination papers.

The other expected candidate, Social Protection Minister Leo Varadkar has yet to speak to the press but will launch his campaign Website later.

The Chairperson Of Fine Gael in Donegal is Doreen Kennedy Sheridan.

She has been paying tribute to Enda Kenny and says the party here is very much looking forward to the election process: 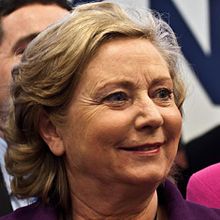 It's been a busy day of political announcements.

The Finance Minister Michael Noonan has revealed he will stand down when the new Fine Gael takes over.

He says it's a good opportunity for change.

While the Tánaiste Frances Fitzgerald and Richard Bruton have both ruled themselves out of the leadership race, despite serious consideration.