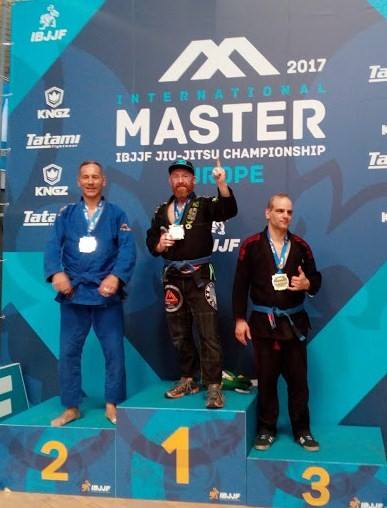 Barely a month on from winning double European gold medals , at the IBJJF European "No-Gi" tournament in Rome at the start of April this year, & he has done the same at these European International Masters "Gi" only event in Barcelona,, winning Gold in the MIV Blue Heavyweight division, and then also lifting Gold in the Open Absolute Division out of a pool of nine fighters

TJ took part in the Masters IV Blue Belt Division at Heavy weight, and secured victory in the final over an Italian fighter to lift his Third European Gold of 2017. He then later in the evening took part in the Open Weight competition, where he competed against other weight division medal winners, and fought through a draw of nine fighters to secure victory in the final, by a points decision, over a tough British fighter, to lift his 4th Euro Gold medal this year to date.

McMenamin is pleased with his form to date, with only conceding one loss by two points, over his last 11 competitive international fights, and not giving away, any further points or submissions to opponent's in the other 10 matches. He is looking to be the IBJJF MIV Blue Belt World ranked overall number "4" at 416 world ranking points, dropping down from number "13" at present with 236 world ranking points when the points from these last championships, are adjusted & added. From nearly 600 IBJJF registered fighters ,he will be the highest European overall ranked fighter at his respective age and belt rank, with only 3 number USA based fighters, ahead of him.