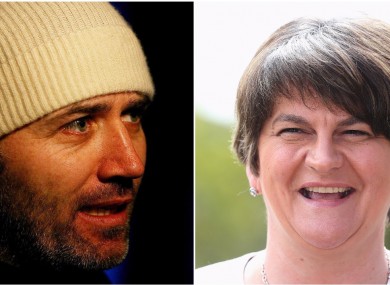 The comedian was appearing on Radio Foyle in Derry.

THE BBC HAS apologised for the language used by Irish comedian Tommy Tiernan on a Derry radio station when he was joking about the DUP’s Arlene Foster.

Tiernan was appearing on The Mark Patterson Show on Radio Foyle on Tuesday ahead of a series of gig he plays in the city from tonight until Saturday.

During the interview, Tiernan was spoke about the DUP leader.

“If she wasn’t in politics I can see her working single-handedly on a tiny little farm in south Fermanagh driving cattle up some country lane,” Tiernan said.

He then, attempted to imitate Foster:

Go on you pups, you fenian bastards, go up you fenian.

The joke and the association of Foster with the offensive term used for northern nationalists drew criticism from DUP MP Campbell among others.

The show’s presenter Mark Patterson attempted to distance himself from the comments after the segment.

Belfast-based newspaper News Letter reports that the BBC has since issued a statement of apology after the joke and removed the recording from its website.

“The language used by our guest was clearly inappropriate. We unreservedly apologise for its use and any offence caused. This section of the programme has been removed for our catch up services,” the statement says.