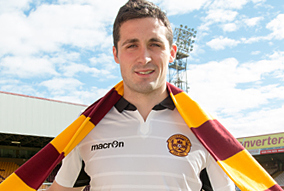 Carl McHugh has won the Motorpoint Motherwell Player of the Month award for February.

The Lettermacaward man,who has missed a large chunk of the season due to concussion, has established himself as one of the most important members of the squad since his return just before the turn of the year.

The midfielder, who has dropped in to central defence in recent weeks, was proud to pick up the award – sponsored by Motorpoint.

“I’m delighted to pick up this award and it means a lot for me that it was voted for by the fans." , McHugh told Motherwell's official website.

“But to be honest, the most important thing is Saturday, and it’s not about the individual it’s about making sure we perform as a team and hopefully we can take something from Ibrox.”