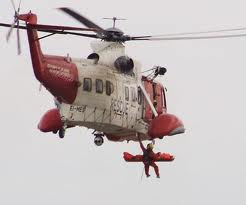 The coastguard was called in for a medevac from a Russian fishing vessel in the early hours of this morning.

Helicopters from Sligo and Dublin attended the scene 180 miles northwest of Erris Head in County Mayo, where a crewman on board the vessel had become ill. The operation was coordinated from the coastguard station at Malin Head.

He was airlifted at half past four this morning and transferred to Sligo University Hospital, where he was admitted shortly before 6am.

Coastguard spokesman Gerard O'Flynn says the distance involved, and the earth's curvature meant one crew provided 'top cover' for the other.............