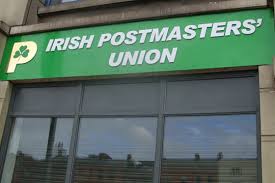 The Irish Postmasters' Union is seeking the implementation of the Kerr Report to save the post office network, despite the fact that it recommends some post office closures.

According to the Irish Independent, the unpublished report, overseen by businessman Bobby Kerr, outlines a range of proposals, including the shutting of 80 outlets.

Confirming the IPU's support for the report, as part of an overall solution to save the Post Office network, she told Highland Radio News the alternative could be over 450 post office closures...........