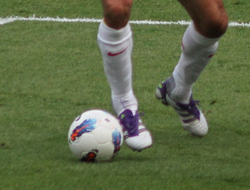 The Donegal Women’s League Under-18 team are back in Inter-League action on Sunday when they travel to Eamonn Deacy Park to face Galway in their latest group game (kick-off 2pm).

Things are evenly poised in the group as Bríd McGinty’s team goes into the west.

These teams met each other last year with Shannon McBride scoring a brace of goals in a 2-1 win for Donegal at The Lakeside in Ballyshannon.

Donegal reached the semi-finals last year and lost out to MGL.

McGinty has plenty of experience within her ranks.

Green was a regualr in the Irish Under-17 side in late 2015 and the Lagan Harps full-back is a key cog in the wheel.

Just last weekend, Neve Scanlon played in goals for the Republic of Ireland Under-15 Schools team in 7-1 win over Northern Ireland.

Catherine Grier, the Donegal Women’s League Under-16 Player of the Year in 2016, has also been around the international set-up, while Danielle McDevitt was capped by Ireland at Under-17 level last year.

Donegal began their group phase with a heavy 4-0 loss to Inishowen, but were awarded a win last month when Mayo were unable to travel.