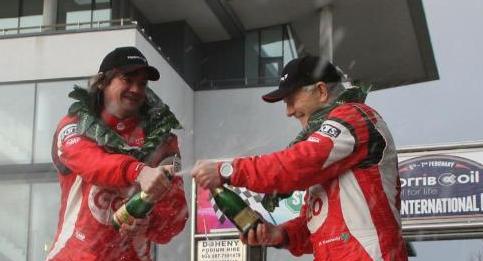 Rory Kennedy became the record 5 time winner of the Galway International on Sunday when the Letterkenny navigator and driver Garry Jennings took victory in their Subaru Impreza.

The Fermangh Donegal partnership had over 50 seconds to spare on the chasing pack after 14 stages in difficult conditions in the west.

Having lead the National Rally for most of the weekend in a lower powered Escort, Damien Tourish and Domhall McAlaney finished second, 31 second down on winner Gary Kieran.

Their was also solid performances from Kevin Eves and Willian Lynch in the Corrolla who finished 3rd overall, Patrick McHugh and Pauric O’Donnell won class 14 and Patrick Bonner and Jordan Murphy were 3rd in class 12.

For Rory Kennedy, he has won the event with three different drivers, Bertie Fisher twice, once with Mark Higgins and now twice with Garry Jennings.

Speaking with Oisin Kelly, Rory says its a proud moment for him...