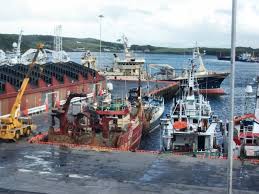 The Agriculture and Marine Minister says he won't scrap a controverial review of mackerel quotas, despite the fact that an expected quota increase will not now materialise.

The review follows a request to the minister to allocate the bulk of any quota increase to vessels in the south of the country, with fears in Killybegs that this could compromise the fishing and processing sectors there.

8. Deputy Pat The Cope Gallagher asked the Minister for Agriculture, Food and the Marine if he will withdraw and cancel the consultation process relating to the sharing arrangements between the refrigerated sea water, RSW, pelagic fleet and polyvalent fleet in view of the fact that the basis for the review was the 14% increase (details supplied); and if he will make a statement on the matter. [4848/17]

Deputy Pat The Cope Gallagher: This question is self-explanatory.  Even if a mistake had not been made by the International Council for the Exploration of the Sea, ICES, in its advice to the European Commission, I would be tabling this question, but the issue has grown more urgent than ever before thanks to the reduction of 9% in the updated advice.  If that reduction does not happen this year, it will happen next year.

Deputy Michael Creed: The north-east Atlantic mackerel scientific assessment by ICES includes information from a number of sources, including catch data, tagging data and three survey indices.  During preparations by ICES for the upcoming benchmark, an error was discovered in the calculation of the northern trawl survey index for 2016 that resulted in values being overestimated.  Thus, the assessment conducted during the 2016 ICES working group and used as the basis for the 2017 advice released on 30 September 2016 overestimated the stock size.
Updated northern trawl survey index values have been calculated and a new assessment and forecast have been carried out by ICES.  Based on this work, new advice for 2017 was issued by ICES on Thursday, 26 January.  According to the Marine Institute, the updated advice is 9% lower than the initial advice for 2017, that is, 926,936 tonnes versus 1,020,996 tonnes.
The original advice for 2017 was for a 14% increase on that for 2016 and it was on this that the 2017 coastal states agreement was based.  Subsequent to that agreement, Ministers confirmed the EU total allowable catch, TAC, and individual EU member state quotas at the December Fisheries Council.  That decision has been given legal effect by the new TAC and quota regulations for 2017.
It is expected that the matter may be considered, probably informally, at coastal state level involving the EU, Norway and the Faroe Islands.  At European level, the right of initiative rests with the European Commission.  If there is support for amending the TAC at coastal state level, it will require a formal agreement.  Following any such revised agreement, an amendment to the EU TAC and quotas would require a proposal from the European Commission and the European Council's adoption of the amending EU regulation.  The Commission has not yet commented publicly on the new advice and a new ICES benchmark assessment for north-east Atlantic mackerel is due next month.
Additional information not given on the floor of the House
Any amendment to the EU TAC and Ireland's mackerel quota that may be determined by the EU Fisheries Council will be taken into account as part of my consideration of the review.  This review relates to the allocation between the RSW pelagic segment and the polyvalent segment in respect of the increased mackerel quota for Ireland in 2017 over that in 2016.  It is important to note that I have not made any decision at this time to change the allocations between the segments.  All relevant issues will be carefully evaluated and consideration given to submissions made in this consultation before I decide if any amendment to the policy is justified for the proper and effective management of the mackerel fishery.
]

Deputy Pat The Cope Gallagher: Sadly, I have not received an answer to my question on what the Minister intends to do.  However, I will have a further minute, so perhaps he might let me know.
If the reduction proceeds, it will set a dangerous precedent in law and departmental authority and fishermen will not be able to take anything for granted when planning in future.  They make significant investments and create jobs at sea and ashore.  They must have something definite.  New boats are being bought and others are being refurbished.
The departmental consultation was based on the premise that there would be an increase this year.  I do not agree with that.  Even if there is an increase, it will be deducted twice over next year.  This process is flawed, so what will the Minister do about it?  Will he be pragmatic and take the immediate decision to scrap the consultation in light of the major mistake in Europe?

Deputy Michael Creed: Notwithstanding the mistaken advice, the revised advice still provides for an increase in the quota.
Separately, I received a submission from a producer organisation, PO, in respect of a review of the sharing of mackerel quota, in particular the proposed increase for 2017.  On foot of that proposal and correspondence, of which I received from much, I decided to put the proposal into formal consultation.  Nothing that might emerge from that process, for example, that the level of increase is less than originally anticipated, is sufficient grounds to walk away from it.  I propose to allow the consultation process to run.

Deputy Pat The Cope Gallagher: Does the Minister fully appreciate that the mackerel quota has been built up by RSW vessel owners, who have made major financial investments?  Does he agree that the polyvalent fleet has seen an increase of 200% over the years?  He needs to be realistic.  What is his preferred choice?  Do we revert to the quota under the revised ICES advice or will he propose to Europe to leave it until next year, which would be a double-edged sword?  Absorbing this year's reduced quota as well as next year's would be almost impossible.

Deputy Michael Creed: The initiative on this matter rests firmly with the Commission.

Deputy Pat The Cope Gallagher: The Minister must-----

Deputy Michael Creed: We have no clear indication as to what it might do.  It might seek to revise the TAC and quota arrangements for 2017 or leave it until the next coastal states negotiations in September-October.
I acknowledge the Deputy's points about the pelagic sector.  I have an open mind, and so I should, about the consultation process that is under way.  I am not predisposed towards any outcome.  I received a submission and I decided to put this matter forward for formal consultation.  I am sure that the Deputy's points mirror many of those that will be raised in that consultation process.
While I am going into this with an open mind, the matter is up for formal consultation in light of the submission that I received, and it would be inappropriate to comment further until we see all of the submissions that are received.