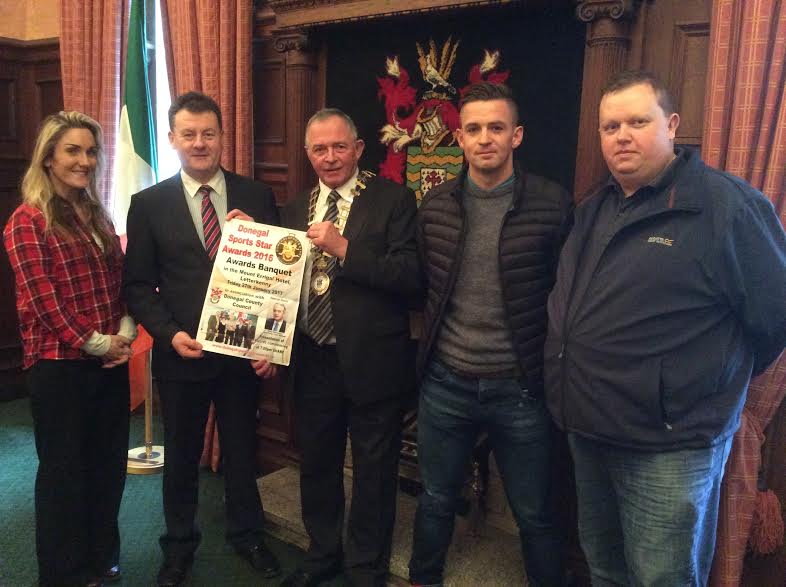 Donegal County Council staff are lending their support to this year's Donegal Sports Star Awards which will take place on Friday week in the Mount Errigal Hotel in Letterkenny. Former Sports Star award recipients Jim Doherty, Shauna Carlin and Kevin McHugh joined the Cathaoirleach and the Chief Executive this week in promoting this year's award ceremony.

Jim Doherty who has represented Ireland in Clay Pigeon Shooting received the Overall Winner of the Donegal Sports Star Awards in 2011, the International Achievement Award in 2012 and was the Clay Pigeon Shooting Winner in 2011, 2002, 2001, 2000, 1998, 1997, 1996 and 1995. Well known athlete and Coach Shauna Carlin received the Athlete of the Year award in 2000 and the Secondary School Sports Girl award in 1992 and has been shortlisted in this year's Coach Category.

Finn Harps veteran Kevin McHugh is also a Donegal Sports Star Award recipient having had the honour of receiving the 2014 Soccer award. Cathaoirleach Cllr. Terence Slowey said “the personal achievements of people in sport right across this county are outstanding and we are honoured to have such fine sports people working in the Council. This is a great example of the individual commitment; drive and dedication needed to succeed in competitive sport and these people are excellent role models not only for our young people but for everyone in Donegal”.

Seamus Neely Chief Executive of the Council said 'the Donegal Sports Star Awards have become a highlight in the sports calendar in Donegal and we in the Council are delighted to be the exclusive sponsors of the awards. Donegal is a sporting county and sport plays a vital role in communities the length and breadth of the county. I would like to take this opportunity to wish all those nominated for this year's award every success."