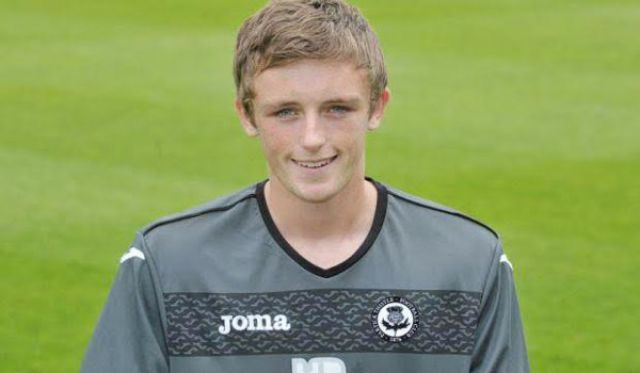 Omagh born midfielder Caolan McAleer is the latest player to sign for Finn Harps ahead of the new League of Ireland Premier Division season.

Manager Ollie Horgan agreed terms with the 23-year-old on Sunday evening and is pleased to add a player who spent four seasons in Scotland with clubs including Partick Thistle, Airdrieonians, East Fife and most recently Greenock Morton.

Horgan says the addition of McAleer is important as replacements are needed in the wide midfield areas following the departure of the likes of Tony McNamee. “Caolan plays mostly in a wide right midfield role so we’re glad to get him in as it’s a position that needed to be filled. I would be very hopeful that his experience in Scotland will make him a key signing for us in the coming season” Horgan said.

McAleer moved from Irish League Premiership side Linfield to Partick Thistle in January 2012. After making his debut for them in May of that year he signed a new two-year contract in July. The Omagh lad subsequently went on loan to Arthurlie. In November 2013, McAleer joined Airdrieonians on loan. At the beginning of June 2014, he signed for East Fife. But after one season with The Fifers, he returned to Airdrieonians, signing a contract with the club in June 2015. In January 2016, McAleer moved on loan to Kilbirnie Ladeside until the end of the season. In July McAleer signed for Greenock Morton. He played for Northern Ireland at Schools Under-18 level in the Centenary Shield.

The new campaign for Harps starts on Friday February 24th with a home game against Cork City.