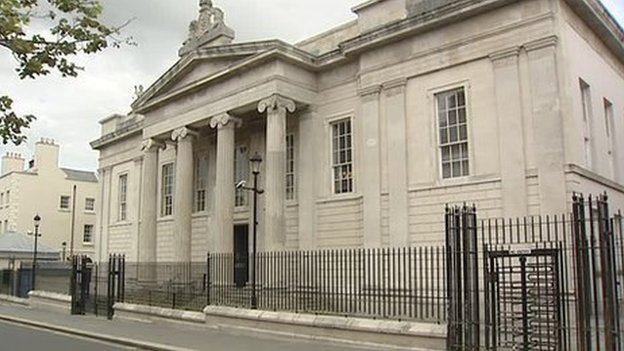 A 48-year-old man has appeared at Derry Magistrate's Court charged with attempted murder and possessing a bow and arrow.
Brian Forbes of Glenanne in the city faced a total of six charges including attempted murder, possessing a bow and arrow, possessing an ax, making threats to kill, causing criminal damage to a door and window and assault all against the same alleged injured party on Tuesday last, January 3rd.
A police officer connected Forbes to the charges and opposed bail.
The court was told that at 8 a.m. the alleged victim heard a bang on his bedroom window.
He went out and the defendant was said to be standing outside his flat armed with a bow and arrow.
He was alleged to have said: "I am going to f-----g kill you."
The injured party retreated back into his house but tried to remonstrate with the defendant through a partially open door.
As he was talking the defendant fired an arrow that lodged in the door.
The defendant was then said to have approached with a large ax in his hand and strike the door between seven to ten times.
At interview the defendant said he had had a bad Christmas and decided to go let the alleged injured party know how he felt about him. He told police he wanted to put the man, an American, out of the community because he felt he was not contributing towards it.
The court was told that both men had been friends at one stage and Forbes felt the fact that they were no longer close was 'a slap in the teeth' for him after all he had done for the man.
The police officer opposed bail stating that they feared interference with the witness and added that the man took the threats seriously.
She said Forbes had repeated his desire to get the man to leave the community.
In response to questions from Mr. Eugene Burns defence solicitor the officer agreed that Forbes had admitted some of the offences but denied the attempted murder and threats to kill.
The court heard that Forbes had mental health issues and had recently stopped his medication. It was also said he was a daily user of cannabis for the past twenty years.
District Judge Barney McElholm said: "When are people going to wake up to the fact that regular use of cannabis leads to mental health issues."
The judge said he would only consider bail if a full support package was in place including mental health interventions. He said his primary duty was to protect the public, and adjourned the bail application, remanding Forbes in custody to appear again on January 12.