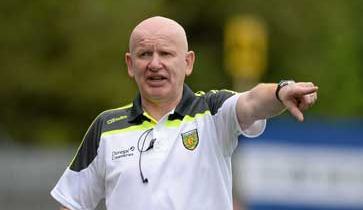 Donegal started the defence of the North West U21 Cup with defeat this afternoon at the hands of Sligo.

Declan Bonner’s experiment side went down 2-13 to 2-7 at the O’Donnell Park in Letterkenny with Lorcan Connor and Daniel Clarke scoring the Donegal goals.

Along with the Dr.McKenna Cup, Declan is building his side towards the Ulster Championship in March.

There was a number of players missing from today’s side while Stephen McBrearty looks set to miss a few weeks having hobbled off with a hamstring injury.

Speaking with Tom Comack, Declan was disappointed with the defeat adding it’s been a difficult juggling process in recent weeks…