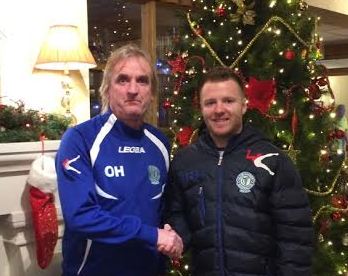 Finn Harps have confirmed that Buncrana born midfielder Jonny Bonner has signed a contract with the club for the 2017 season. It will be Bonner’s second stint at Finn Park having been a member of the Wexford Youths squad last season. He was a regular in the middle of the park for Shane Keegan’s side but there was to be disappointment for the Youths who ended up being relegated to Division 1 after losing to Drogheda Utd in the play-offs.

The addition of Bonner is a significant signing for manager Ollie Horgan who will be hoping that his creative talents in the middle of the park can carve out scoring opportunities for new striker Danny Morrissey. Bonner who is predominantly left-footed impressed in Wexford Youths 1-0 win against Harps at Finn Park in August. “It’s important to get a player of Jonny’s talent signed. He’s a fine footballer and hopefully he will play a big part for us next season” Horgan said.

Bonner played for Derry City at underage level in 2008 and also turned out for the club's A Championship side in 2009, but he moved on without making a senior appearance for the Candystripes. Bonner spent a couple of years at Illinois University in the USA before returning to the League of Ireland scene in January 2013 when he signed for Finn Harps. He made his league debut against Waterford United on 26 April 2013 and he had made 13 league appearances by the end of the season. In 2014 he added eight more league appearances to his career total but in July 2014 he left Harps and joined Letterkenny Rovers shortly afterwards.

At the start of the 2015 season, the Buncrana man signed for Wexford Youths in the First Division and went on to play a part in ten of the first eleven league games of the season, before he left the club in July 2015 and rejoined Letterkenny Rovers. However in January 2016, Johnny returned to Wexford Youths to sign on for the 2016 Premier Division campaign and was a regular in the team through the campaign.