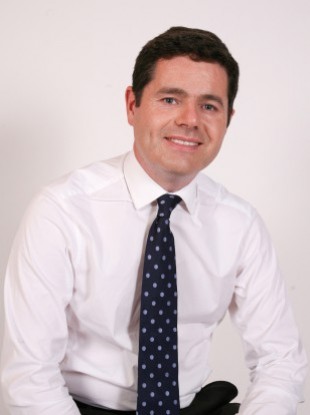 Public Expenditure Minister Pascal Donohoe says he is working to ensure that Brexit does not compromise any offers of EU funding already made in Northern Ireland.

Mr Donohoe is in Derry today, along with Stormont Minister Martin O'Muilleoir, to view a number of projects supported by Peace and INTERREG.

They include the North West Regional Science Project, a cross border initiative with facilities at Fort George in Derry and the grounds of Letterkenny Institute of Technology.

The joint visit began at the Peace Bridge, which Minister Donohoe described as a visible demonstration of what Europe has done to promote peace and reconciliation.

Minister Donohoe in Derry to see EU funding in action

Minister for Public Expenditure and Reform, Paschal Donohoe, T.D., is in Derry today (Friday) to see how EU funding under the PEACE and INTERREG programmes is being used to support cross-border co-operation between Northern Ireland and the border region of Ireland.

Speaking during his visit, the Minister said:

“I have come to Derry with my Northern Ireland colleague, Máirtín Ó Muilleoir, to see the important work that the PEACE and INTERREG programmes are funding on the ground and to hear the experience of some of the programme beneficiaries in the city.

“I am particularly pleased to be in Derry where the PEACE Bridge is a very visible demonstration of the support that the European Union has given to the process of peace building and reconciliation over almost a quarter of a century.

“I have been very impressed by the work that has taken place under the two programmes and have been struck by the importance of EU funding for programme beneficiaries. It is vital that both their good work and the EU funding continue”.

Ireland and Northern Ireland will benefit from almost half a billion Euro of cross-border EU funding over the period 2014-2020. The PEACE and INTERREG Programmes are managed by the Special EU Programmes Body, one of the North South bodies established under the Good Friday Agreement. Together they have a combined value, including Member State match funding, of €550 million.

Minister Donohoe said that the decision of the UK to leave the EU would have obvious implications for two programmes that are 85% funded by the EU.

“As part of the Government's contingency planning for Brexit, my Department identified the implications for the two programmes as an issue that would have to be addressed in conjunction with the Northern Ireland Executive and the European Commission, and that process commenced immediately following the referendum result.

“My objective has been to Brexit-proof Letters of Offer to the greatest extent possible and to give programme beneficiaries assurance as to the legal and financial commitments they are entering into so they can plan for the future with confidence. Following discussions involving my own officials, officials from Minister Ó Muilleoir’s Department, and the European Commission we have achieved that; so that it now possible to proceed with the full implementation of the programmes on a much firmer basis than would otherwise have been the case.”

Looking to the future, the Minister underscored the Irish Government’s commitment to successor programmes post-2020:

“The Irish Government is proud that it was able to secure EU funding for a fourth PEACE Programme for 2014-2020. I believe the important work that the programmes have supported is recognised and valued throughout Europe and that the Irish Government will be able to mobilise support from the European Union for future programmes post-2020.”