The Standards Commission has found that Senator Ó Domhnaill contravened ethics legislation when, as a councillor, he submitted claims for travelling and subsistence expenses from two separate bodies for the same dates.

The Standards Commission found that Senator Ó Domhnaill contravened sections 168 and 169(3) of the Local Government Act 2001, acted in disregard of provisions of the Code of Conduct for Councillors and did a 'specified act' within the meaning of the Standards in Public Office Act 2001 in regard to each set of circumstances. The Standards Commission found that each contravention was committed intentionally and was, in all the circumstances, a serious matter. The Commission also decided that it is not in a position to find that Senator Ó Domhnaill acted in good faith in relation to the contraventions.

In accordance with the requirements of the Act, the Commission has sent copies of its report to Senator Ó Domhnaill, to Mr Seamus Neely, Chief Executive, Donegal County Council and to Councillor Terence Slowey, Cathaoirleach, Donegal County Council. A copy was also sent to the Ministers for Public Expenditure and Reform and for Housing, Planning, Community and Local Government.

In the conclusion of the report, SIPO says as there has been no repayment of the expenses incorrectly claimed by Senator Ó Domhnaill and notwithstanding that it is open to him to make such a repayment, it is a matter for Donegal County Council and/or Údarás na Gaeltachta to take the appropriate steps to recoup the moneys involved.

Full report can be viewed HERE 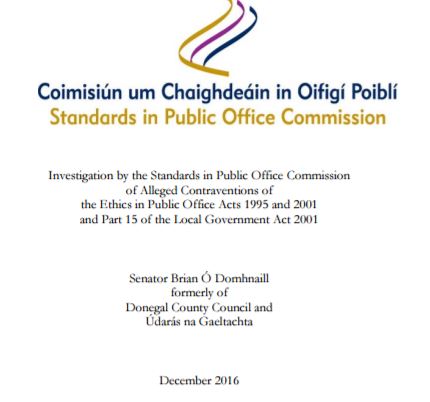