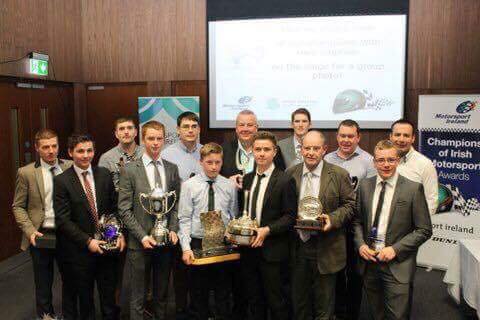 Donegal Motor Club members were among the recipients of awards at this weeks Motorsport Ireland Awards ceremony in Dublin.

Kilmacrennan’s Paddy Robinson was presented with the FAI Celtic Trophy Group N award. Paddy and his Cork driver David Guest competed in an Evo9 to seal the ERT2 category title.

Letterkenny man Marty Gallagher and his navigator Dean Sullivan were second in the Juniors and 2nd in the FWD in the European Rally Trophy.

The other winners on the night included Josh Moffet being named the Billy Coleman Young Driver of the Year, Craig Breen was honoured as the International Driver, Kevin Barrett was named The Ivan Webb Memorial winner his outstanding contribution to motorsport and Cork’s James’ O’Brien was the Clubman of the Year winner.