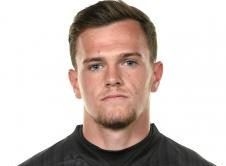 Just a day after being on the winning Cockhill Celtic side against Finn Harps Reserves, their goalkeeper Harry Doherty has been confirmed as Ollie Horgan’s latest recruit ahead of the new League of Ireland Premier Division season. The 20-year-old played his last game for his hometown club in the 5-1 victory over Harps in an Ulster Senior League match in Killygordon on Sunday.

Doherty who was formerly on the books of both Charlton Athletic and Brighton & Hove Albion will now battle it out with Ciaran Gallagher for the No.1 jersey when the competitive season starts again at end of February. His goalkeeping talents first emerged as a schoolboy with Cockhill Celtic, working his way into the Republic of Ireland underage international set-up.

Doherty played twice for his country in the UEFA U17 Championships qualifiers against Serbia and Georgia in 2013.

He moved initially to Charlton Athletic before transferring to Brighton & Hove Albion two years ago.

Harry won his first U19 cap against the Netherlands in September 2014 and also played against Sweden the following month. He is the second new face coming to Finn Park following the high profile signing of Cork City striker Danny Morrissey last month.