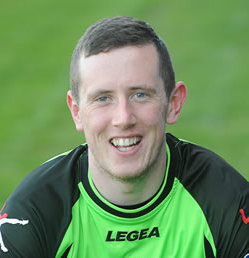 Goalkeeper Ciaran Gallagher has signed a new contract with Finn Harps for the 2017 season. Manager Ollie Horgan says the decision of the 24-year-old to agreed terms is a huge boost as he continues the work of building a squad that can compete in what will be a hugely competitive League of Ireland Premier Division.

“I’m very pleased to have Ciaran on board again. He has been a key player for me over the past two seasons” Horgan said.

Ciaran Gallagher made his debut for Harps when he came on as a second-half substitute for the injured Gavin Cullen in the 1-0 defeat against Sporting Fingal at the Morton Stadium in April 2009, just two days after his 17th birthday, and at the end of that season he signed a two-year contract extension.

The Raphoe man signed for Roddy Collins at Derry City in the pre-season of 2014 but only made three appearances before rejoining Finn Harps at the end of that year. He kept 17 clean sheets as Finn Harps were promoted to the Premier Division after overcoming UCD and Limerick in the play-offs.

Elsewhere at Finn Park, Tony McNamee has decided to move on from Harps.

The Ramelton man has joined his hometown club Swilly Rovers in the Ulster Senior League and signed on the dotted line for Rovers on Monday night.