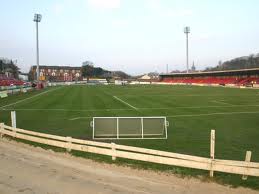 It's been confirmed that the contracts for the £7m Brandywell Redevelopment Project have been signed earlier today.

It's understood that work on the project by Co Tyrone based contractors, McAleer and Teague will begin next week and will include a new stand, changing rooms and a new synthetic playing surface.

The club is now looking for a new home for the 2017 season while work at the Brandywell is being carried out.

Head of Community, Development and Leisure with Derry and Strabane District Council Barry O'Hagan says it's an exciting time: