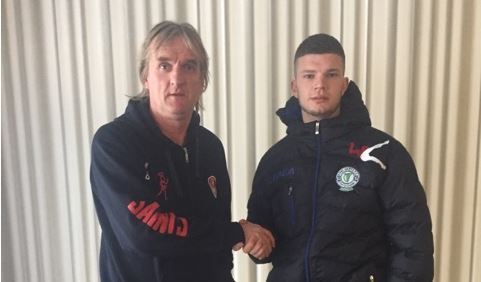 Finn Harps manager has expressed his satisfaction with the decision of Danny Morrissey to join his team for the 2017 League of Ireland Premier Division season. The 22-year-old striker signed for Harps at the weekend after successful negotiations were concluded with the Harps boss in Cork.

Horgan says he personally, as well as the club, are very pleased that a player of Danny Morrissey’s calibre has opted to join Finn Harps. “We are delighted to get Danny on board for next season. I have known Danny a number of years now and always had a high opinion of him. I think he will fit in great with us, both with his ability and his work rate. The move should be of benefit from the club point of view as well as for Danny himself who needs to play consistently” Horgan said.

Morrissey is the third player to have signed after Ciaran Coll and Gareth Harkin earlier this month renewed their contracts at Finn Park for another season. Ryan McConnell, who is currently on loan at Irish League side Ballinamallard, is the only other player under contract with Harps.

So the manager has plenty of hard work ahead of him in the coming weeks in terms of re-signing as many of last season’s squad as possible and trying to attract more new faces to Ballybofey. He must find replacements for Kevin McHugh who has retired and Keith Cowan who will not play in 2017 as he rehabs from a serious knee injury sustained in a league game against Cork City a couple of months ago at Finn Park.