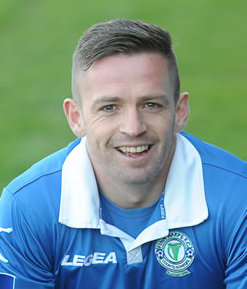 Finn Harps legend Kevin McHugh has being confirmed as the club’s first U15 manager for the inaugural League of Ireland season at this age group.

“We’re delighted with the appointment of Kevin who has been a great playing servant of the club but alongside that over the past three years he has enjoyed great success with Donegal Schoolboys sides and he also has very good coaching qualifications” said Finn Harps Secretary John Campbell.

The Killea man has managed Donegal to national and Foyle Cup titles whilst developing boys for the international stage. McHugh’s county teams are right up there with the best in the country, making him one of the top coaches not just in Donegal but in the Northwest.

The Finn Harps Board has agreed to McHugh’s request to allow him to fulfill his commitments with the Donegal Schoolboys squad right up until he is ready to take charge of the Finn Harps U15s.

“The Finn Harps Board and Kevin has had lengthy discussions regarding player selection. He believes strongly that Finn Harps FC as the county’s only senior team, should prioritize looking after young players from the Donegal and Inishowen League areas first and foremost” Mr Campbell concluded.