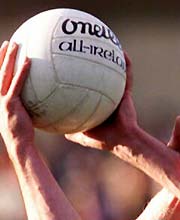 Pomeroy’s Sean Quinn got the game going in Pairc Esler, Newry, when he kicked over a close-range point from play on the third minute.

It was nip-and-tuck for the next 10 minutes until Pomeroy began to get ahead.

Pomeroy’s John Loughran kicked a close-range point from play on 12 minutes to open up a two-point lead: Pomeroy 0-04 v 0-02 Donaghmoyne.

They extended their lead to four points within five minutes when Pomeroy’s Chris Colhoun drove the ball low under the Donaghmoyne goalkeeper to make it: Pomeroy 1-04 v 0-03 Donaghmoyne.

At half-time it was Tyrone’s 2014 Ulster champions who were in the lead.

Pomeroy were deservedly in the lead.

Donaghmoyne kicked five wides in the first half, compared to Pomeroy's two wides.

The second half was dominated by Pomeroy and they ran out deserved winners.