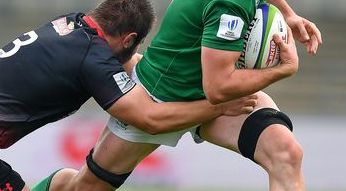 Robbie Henshaw and Jonathan Sexton are out of Saturday's Test with Australia at the Aviva Stadium.

Henshaw suffered a concussion after being knocked unconscious in his collision with the All Blacks' Sam Cane.

Both Rob Kearney and C-J Stander will observe return-to-play protocols having each suffered head knocks in Saturday's defeat.

Simon Zebo and Tadhg Furlong will have knocks monitored this week.

Peter O'Mahony, Ultan Dillane and Keith Earls are all expected to take a full part in training this week.

While Ulster centre Stuart Olding, and Munster back Rory Scannell have been added to the squad as cover.