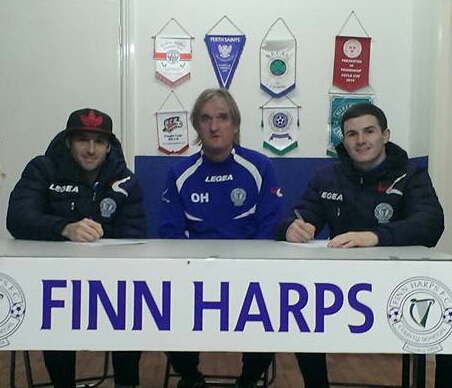 Ollie Horgan has started to assemble his squad for next year as he secured the signatures of two players with over 300 Harps appearances between them.

Defender Ciaran Coll and midfielder Gareth Harkin have this evening committed to Finn Harps for the 2017 premier division campaign.

Coll started 29 games for Harps in the league in 2016 and once in the cup, taking his career total to 191 starts and 12 substitute appearances with the club, contributing 3 goals in that time. Harkin meanwhile started 25 league matches in the last campaign with two cup starts and one cup sub appearance.

Overall Harkin has played 94 times from the start, coming on as a sub a further 9 times, chipping in with 6 goals during that time.

Ollie Horgan said "I am very pleased Ciaran and Gareth have signed on for next season as they have both lads have given great service to the club in recent years. The step up to premier division last year was something of a learning curve and next year could be even tougher, but these signings have got our pre-season off to a positive start."