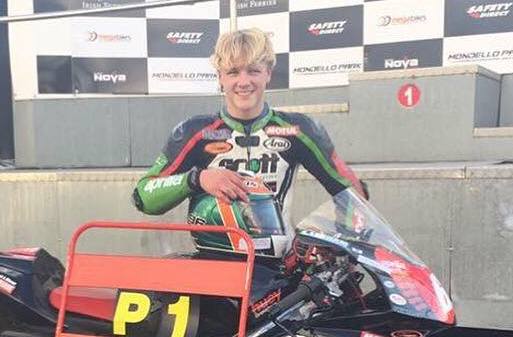 Rhys Irwin is preparing himself for what could be an historic weekend at the Worlds most successful one make series. The 14 year old from Kilmacrennan in Co. Donegal heads into the final 30 points ahead of season rival Jack Scott. Rhys has taken 5 wins to date and 23 podiums on his way to the championship lead.

"I have had a brilliant season but I am not really thinking about the points difference . 30 points sounds like a lot but in this Championship it really isn't because the racing is so close and we have four races in the weekend so anything can happen. I am just overwhelmed to be in with a chance to put my name alongside previous winners like Casey Stoner , Cal Crutchlow , Luke jones and Steve Brogan "

Last weekend Rhys went on to win the Masters Superbike championship Production Class where he broke his own lap record on the International track in Mondello leaving it at 2.00.504 which has showed the pace that the 14 year old was doing, considering the previous lap record was held by Daragh Murphy at a 2:06.475. capping off what has been a great year in selected races in Ireland.

As a result of these fantastic results Rhys was invited to the Red Bull Rookie Selection Event in Spain where 100 of the best teenage riders from around the World will go head to head for a chance to be a "Red Bull Rookie " for the 2017 season. The Red Bull Rookie championship runs within Motogp and is a direct path for teenagers to get into grand prix racing.

"To be honest I have not really thought about it , all my effort is concentrating on Superteens. It is nice to be considered but this is my first time at the Selection Event and many of the riders have been in there before, so I will be using this year as a learning experience, and just enjoy it."