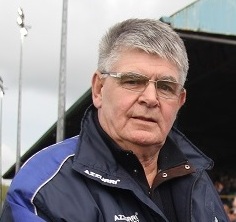 The chairperson of Finn Harps Football Club, Sean Quinn, has praised the efforts of the players and manager Ollie Horgan ahead of tonight’s crucial League of Ireland Premier Division game against St. Patrick’s Athletic in Ballybofey (kick-off 8.00). Quinn has been particularly pleased with the manner in which the squad has stuck together and weathered a very difficult couple of months in the top flight.

“We have a huge game against Pat’s tonight and our players deserve a big turnout of supporters to try and get the three points that will bring us closer to being sure of a place in the Premier Division next season. I’m really proud of these lads who stuck together even though the team was going through a very bad patch over a couple of months up to last week. Thankfully we got a draw in Sligo and the win on Friday night against Bray. But as Ollie [Horgan] has stressed, the job is not done. We need a good result tonight as the next two will be tough away games against Cork City and Wexford Youths” Quinn said.

The Harps Chairman has praised the support the team has received all season. “It has been a huge help to the team all season and tonight it would be great if the supporters come out in big numbers and create that special big match atmosphere to match other big nights at Finn Park down through the years.” Quinn admits it has been at times a difficult season both on and off the pitch but says the Board of Directors never expected anything different

"When we got promoted last year we knew we had to prepare ourselves for some challenging times, but we vowed that everyone would stick together and keep focused on our goal which is to retain our top flight status. Considering our players are part-time in a mostly professional league, they have acquitted themselves well and now our destiny is in our own hands. Historically we have found this division very difficult so it would be great credit to all involved if we were to see the job through and it would be just fantastic to get a result tonight to bring us closer to that goal of being in the Premier Division next season.”

Quinn is also very optimistic that the club has a bright future with both the Harps U19s and U17s having qualified for the knockout stages of FAI National League competitions. "Despite our limited resources we are performing well at all levels. Both our U19s and 17s are going from strength to strength. The U19s had a brilliant victory over a very good Cork City and have a big semi-final against UCD this Saturday at Finn Park."