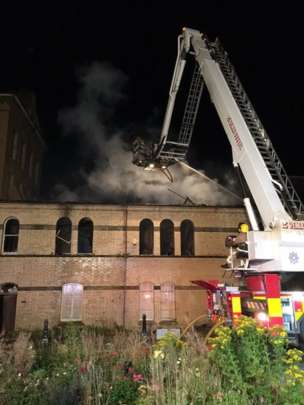 The Northern Ireland Fire and Rescue Service has confirmed that the latest fire at the derelict Herdman's Mill in Sion Mills was arson.

The fire broke out shortly after 9 o'clock last night, and was brought under control by midnight by firefighters from Strabane, Derry, Castlederg and Newtownstewart fought the flames.

There have been several deliberate fires at the site in recent times, including two within two days in June.

The fire was first reported by Andy Patton, chair of the Sion Mills Community Development Association.

He spoke today on the Shaun Doherty Show, saying the building is now in a very dangerous state..........

There have been calls for the building to be sealed off and access to it restricted. Fear has been expressed that the arson may be the work of young people.