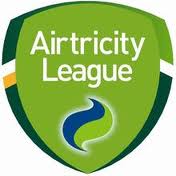 Finn Harps lost 2-1 at Sligo Rovers after extra time - Ryan Cunningham gave Harps the lead only for Sligo to equalise close to the end. Sligo then won it in extra time.

And Aaron McColgan hit five goals as Derry City beat Salthill Devons by eight goals to 2 in their second round match.