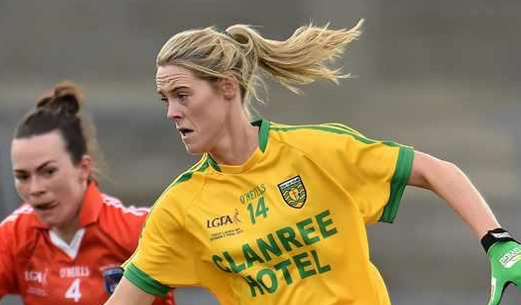 Given that 13 players were absent from the Division 2 League title winning squad, many expected Michael Naughton’s charges to make an exit, but his charges had other ideas.

Galway settled quickest with four of the opening six points, to take a 0-4 to 0-2 lead in the seventh minute, but Donegal made the Connacht side work hard.

They fired 1-2 without reply in a three-minute spell, including their opening goal from Glenfin’s Yvonne McMonagle in the 11th minute, following a Roisín Friel pass.

Amber Barrett and Katy Herron also added points, as Donegal took a 1-4 to 0-4 lead, but Galway worked hard and levelled the tie entering the second quarter.

Maria Hoey started and finished a great team move, which finished in the Dublin based player firing past Donegal keeper Aoife McColgan to level the tie at 1-5 apiece.

Donegal were guilty of three wides from as many attacks, and although McMonagle put them ahead - the sides were twice level, before a Mairead Seoighe point gave Galway a 1-8 to 1-7 lead with less than five minutes to go before the half-time hooter.

However, Donegal finished the half strongly, with Niamh Hegarty winning a penalty, after the Donegal skipper was fouled by Noelle Connolly.

Barrett done the business, with a well placed spot-kick to ensure Donegal held a 2-7 to 1-8 half-time advantage.

Donegal dominated the opening stages of the second half, but only had a point to show for their efforts, from McMonagle from a placed ball.

Galway worked hard and were rewarded for their efforts with Nicola Ward finishing the ball to the Donegal net in the 34th minute, after good work by her sister Louise and Gillian O’Connor.

Donegal moved ahead soon after thanks to a McMonagle score, and had the ball in the net in the 37th minute when Niamh Hegarty palmed home.

However, the Moville players effort was disallowed after she pushed Galway keeper Tina Hughes.

Donegal pushed three points clear with McMonagle bringing her tally to 1-6, and ensuring a 2-11 to 2-8 lead.

Galway never gave up, with Seoighe scoring a point, before taking the ball from Edel Concannon and firing to the net, to hand the Tribeswomen a one-point lead entering the final quarter.

The sides were level for the sixth time in this game, after McMonagle brought her tally to 1-7, but Donegal took the initiative with 12 minutes remaining, with their third goal.

Barrett finishing a second penalty to the net, after a foul on McMonagle.

Galway put together some fine moves after this, but crucially struggled to score.

At the opposite end, Donegal were denied a fourth goal after Tina Hughes pulled off a fine save from a Barrett shot.

Galway fought until the bitter end, with Roisin Leonard netting their fourth goal just 20 seconds after her introduction, while the same player levelled the tie with a final point with 90 seconds on the clock.

However, Donegal worked hard and won a late free, which McMonagle herself converted to finish with 1-8, and earn a place in the last eight of the All-Ireland Series.