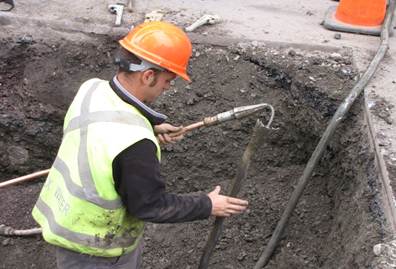 Irish Water is today urging all homeowners in Donegal whose houses were built before 1980 to check their internal plumbing for lead pipes.

The utility says public drinking water supplies are lead free, but lead can dissolve in drinking water from internal lead pipes which are common in older homes and buildings.

Irish Water, which has opened an eight week consultation on its plan to remove lead from the system, says an estimated 180,000 homes in Ireland and hundreds of commercial and public buildings still have internal lead plumbing, including lead service pipes from the water main to the stopcock.

However, while Irish Water will pay to replace the pipes outside properties, homeowners may have to pay to strip out the lead piping inside, and that could cost up to €5000.

Government grants are available, but Richard Boyd Barrett of AAA-PBP says whatever happens, the people always ends up paying...................

27th July 2016 - Irish Water is today urging all homeowners in Donegal whose houses were built before 1980 to check their internal plumbing for lead pipes. Public drinking water supplies are lead free but lead, which poses a serious health risk, can dissolve in drinking water from internal lead pipes which are common in older homes and buildings. Irish Water is confident that lead piping has been removed from the public water distribution mains but the utility estimates that approximately 180,000 homes in Ireland and hundreds of commercial and public buildings still have internal lead plumbing, including lead service pipes from the water main to the stopcock. Of the homes affected around the country, about 40,000 are thought to have shared backyard (common service pipes) which Irish Water will be targeting the replacement of over the next 5 years. Irish Water is issuing this advice as it launches an 8 week period of public consultation on its draft ‘Lead in Drinking Water Mitigation Plan’ which runs until the 21st September next.

Exposure to lead is a known serious health risk particularly affecting young children. In recent decades, lead has been removed from petrol and paint. Since then, Donegal residents have had limited exposure to lead except in drinking water where people with lead plumbing in their home can be exposed to low concentrations of lead as it dissolves in drinking water passing through lead pipework on its way to the tap. Because of the known health risks, the limit for lead in drinking water has been reduced to a very low level in EU Drinking Water Regulations (10 parts per billion). Sampling by Irish Water has shown that this limit can be exceeded (in some cases significantly) where water flows through lead pipes.

The Health Services Executive has advised the public (HSE Lead FAQs May 2015) that because lead affects the developing brain, the risk from lead exposure is greatest for young children, infants and babies in the womb. Bottle-fed infants are most affected by lead in drinking water, because for the first 6 months of life, all of their food comes from formula made up with drinking water. Children and infants absorb more lead than adults.

Public side pipework, as far as a property boundary, is the responsibility of Irish Water but all pipes within the property boundary including those in the home are the responsibility of the property owner, except for those 40,000 served by common backyard mains where responsibility is shared. The best and most effective way of dealing with lead in drinking water is to replace all lead pipes and Donegal homeowners should seek the advice of a plumber if they are unsure what material the pipes in their home is made from. The Department of the Environment has established a grant scheme to assist low income households to replace lead pipes.

Jerry Grant, Managing Director of Irish Water, commenting on the launch of the public consultation said; “Irish Water has today published the first plan to reduce the risk to public health from lead dissolving in water passing through old lead pipes. This plan is the result of major surveys of the issue, review of international practise, consultation on the issues with key health, environmental and other stakeholders. The plan includes much more widespread sampling (already underway) which is used to inform the public of the risk and help prioritise Irish Water actions. Irish Water is now targeting 35,000 random samples of water quality annually compared with 3,000 previously. Drinking water produced at our plants is lead free and we have already replaced all lead water mains in the distribution system. We have also started a programme to replace any remaining lead service connections, these are the short pipes that connect the watermain to property boundaries prioritising common or shared backyard service pipes. The greatest risk remaining from lead in drinking water is therefore arising on private property from internal plumbing,” Jerry Grant explained.

Outlining the options available to Irish Water to assist the public in reducing the health risk from lead pipes Jerry Grant added, “While full lead replacement is the best option, this has taken decades in other countries. For that reason, and following the experience of other countries who have addressed this problem much earlier than Ireland, we have identified an option to treat the water at the treatment plant in order to reduce the risk. A food grade product called orthophosphate can be added to drinking water at our plants to coat old lead pipes in people’s homes and reduce exposure and consequent health risk until the pipes are replaced. This option is extensively used in Britain, Northern Ireland and widely across North America. Before Irish Water can commence this practice in Ireland it is obliged under environmental legislation to consider the potential impact on the environment. This will involve individual assessment for each Irish Water supply. The ‘Lead in Drinking Water Mitigation Plan’ is Irish Water’s contribution to the overall national strategy for lead pipe removal. We are now asking members of the public to look at the plan and give us their feedback on our proposed approach. In the meantime, we are also urging all property owners in Donegal, especially those with young children, to check for lead pipes and to have them replaced if at all possible.”

Public consultation on the ‘Draft Lead in Drinking Water Mitigation Plan’ will run for 8 weeks from Wednesday 27th July until 21st September 2016 during which time the draft Plan and associated environmental reports are available to view online any time at www.water.ie/lead and during working hours at the planning counters of the Local Authority offices. Comments and feedback can be sent to Irish Water by 5pm on 21st of September by email or post as outlined below:-

The final plan and the accompanying SEA Statement will be published once the public consultation is completed.

Information on the health effects of Lead in Drinking Water is available here:

Information on Grant Assistance for replacement of Lead Pipes is available here: