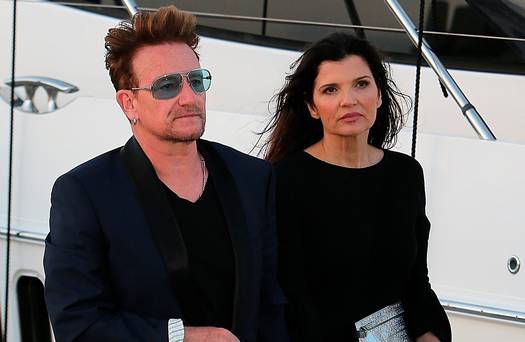 The U2 frontman has always supported the Oscar winner's endeavours and even performed at last year's exclusive bash in St Tropez. And this year, he was joined by his famous family for the A-list celebrations.
After arriving at St Tropez port, the 56-year-old rocker and his wife of 34 years Ali Hewson, who looked elegant as ever in a classic black gown, held hands as they led their children to the venue.
Although their actress daughter Eve (25) clearly wasn't in the mood to be photographed as she arrived wearing a black hoodie in an attempt to cover her face.
Now in its third year, a ticket to the DiCaprio Foundation's now world-famous auction, in support of "long-term health and wellbeing of all Earth’s inhabitants", has become harder and harder to secure with a strict A-list guestlist.
Other attendees included actress Michelle Rodriguez, Nina Dobrev and the roster of supermodels you'd expect at a DiCaprio event including Doutzen Kroes, Joan Smalls, Cara Delevingne and Selena Gomez; while his exes Toni Garrn and Kelly Rohrbach were also spotted.
His current rumoured girlfriend Ninia Agdal wasn't pictured at the event.
Items auctioned off on Wednesday night included a Rolex worn by the star, the diamond cufflinks he wore while accepting his Best Actor Oscar for The Revenant, a private game of Texas Hold 'Em with Edward Norton and Jonah Hill, an evening with superstar singer Mariah Carey and a lunch with his Wolf of Wall Street co-star Margot Robbie was also up for grabs.
He also offered a day with him at the US Open Men's Tennis Final and spending a year as a guest of Harvey Weinstein, where the lucky winner will join him at the Met Gala, the Oscars and the Cannes Film Festival.