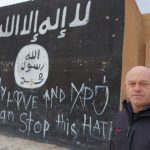 Ross Kemp narrowly escaped snipers in Syria as he filmed his new hard-hitting documentary The Fight Against Isis.

The 51-year-old EastEnders actor, turned investigative reporter, visited war-torn areas of Syria and Iraq for a new Sky 1 show where he meets the Kurdish armed forces taking on Islamic State.

But the crew nearly didn’t make it out alive as they were targeted by Isis snipers on the west bank of the Euphrates river.

“Our route to safety was dangerously exposed. The sniper opened fire on us as I was just a few feet from cover and the crew were still trying to get across,” Ross explained.

Thankfully everyone survived the attack.

Ross, who recently reprised his role as Grant Mitchell on the EastEnders, praised the Kurdish forces he met.

He said: “The Kurds are a beacon of light in a sea of tyranny. They’ve taken the fight to Isis.The Fight Against Isis is the latest dangerous investigation for the EastEnders actor (Sky)

“Behind the front lines I’ve witnessed a genuine movement for democracy, equality and tolerance.”