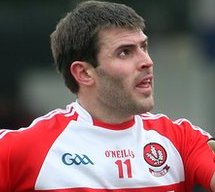 Derry beat Meath today thanks to a second half comeback that was spearheaded by Mark Lynch.

They now march on to the All Ireland Championship.

But Derry manager Damian Barton’s half-time team-talk seems to have energised Derry, whose play was more purposeful in the second half.

Mark Lynch scored a glut of points in the second period, but then damaged a shoulder as the game approached the final whistle, reducing his impact on the game and allowing Meath to re-group.

Enda Lynn was then introduced for Derry and they immediately pulled back a point from play.

Enda then Lynn floated over a superb point to narrow the gap to only two points, before Lynch reduced it to a one-point game with a score from a free.

They wrapped it up with another point to win by three points.