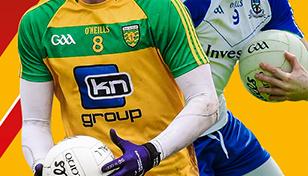 Donegal and Monaghan have both named unchanged line-ups for their Ulster Senior Football Semi- final replay this Saturday.

Frank McGlynn was withdrawn towards the end of the game after taking some heavy knocks, but he is fit and named to start in the half-back line.

Neil McGee is once again unavailable for the game as a result of his red card in the quarter final against Fermanagh. McGee had a second appeal rejected by the CAC earlier this week.

Rory Kavanagh is partnered by Odhran Mac Niallais in the middle of the park, captain Michael Murphy is named at full forward and Ciaran Gillespie starts his second championship game at full-back.

Monaghan's Fintan Kelly and Owen Duffy retain their starting roles with Dessie Mone and Dermot Malone named on the bench .

The game throws in at 7pm on Saturday at Breffni Park.

The Ulster Championship Semi Final Replay between Donegal v Monaghan will be LIVE on Highland from 6.45pm on Saturday with Oisin Kelly and Declan Bonner in association with Brian McCormicks Sports & Leisure, Main Street, Letterkenny.