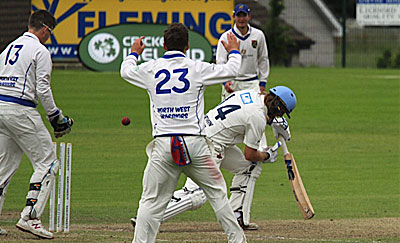 As expected the Hanley Energy Interprovincial Championship game between the North West Warriors and the Northern Knights ended in a tame draw on Thursday afternoon as two very evenly matched teams cancelled each other out in a rain-affected contest.

The NCU side’s Jason Mulder was the star for the visitors on the final morning as he claimed 6 for 92 -five of them lbw decisions- to leave the Warriors all out for 318 and with a first innings lead of 41.

The home side resumed on an overnight score of 224 for 5 after Day 2 had been cut short by the elements, as they chased down James Shannon’s team’s effort of 277 all out.

Warriors skipper Andy McBrine continued his sparkling run of form with the bat, ensuring the hosts would secure maximum bonus points the Donemana all-rounder hit 3 fours and 4 sixes- one of them into the nearby housing estate- as his excellent 82 took the Warriors’ reply beyond 300.

McBrine shared a 61-run stand with Aaron Gillespie who made a valuable 36 before becoming the first of two wickets in two balls for Nathan Smith. And it was the Instonians player who finally did for McBrine too; holding a stunning one handed return just as the Warriors captain looked primed to post his century.

The final say however belonged to Mulder and another lbw verdict too- Jarred Barnes the last to go, leaving the Knights with 45 minutes to survive before lunch.

Chris Dougherty hasn’t enjoyed the best of returns to his old stomping ground this week and he made just 7 before falling to another excellent catch- this one from Ryan Macbeth off the bowling of Barnes.

Nikolai Smith and James McCollum got the visitors safely through to the break but soon after the re-start Macbeth held a brilliant caught and bowled to see off Smith for 11. Any hope that the Warriors would set up the chance of a win were then expelled by McCollum and Shannon however as they kept the home attack at bay for the next 37 overs.

McCollum top scored with 76 (7 fours) while Shannon went to the rope the same number of times in his 59 as the batsmen shared a stand worth 126.

Both were dismissed in quick succession by Ross Allen (3-70), a youngster who will have gone into plenty of notebooks after a superb all-round effort in the game, and the left arm spinner also bowled Jamie Holmes for four to breathe just a glimmer of light into the contest.

Greg Thompson with an entertaining 39 not out (3 fours, 3 sixes) and Lee Nelson (13*) ensured there was to be no further alarm at the end as the contest petered out.

The Warriors are back in action on Friday when they entertain Leinster Lightning in a T20 contest at Eglinton. Action there gets under way at 5pm.