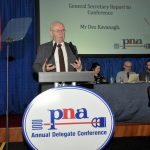 Mental health care has suffered from a lack of investment and reduced staffing since 2006 according to a new report to be launched later today.

The Royal College of Surgeons in Ireland and the Psychiatric nurses association have examined the 'Vision for change' strategy which was supposed to create community based care.

The research found services have been reduced without the proper replacement for them being put in place.

Des Kavanagh the General Secretary of the PNA says the report paints a fairly bleak picture.........