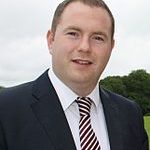 The North's Infrastructure Minister Chris Hazzard is in Rotterdam this week attending one of Europe's biggest transport conferences, saying he hopes to use it to get EU support for key projects includingt the A5, A6 and Derry Transport Hub.

Minister Hazzard says the annual Trans-European Transport Network Conference is an important arena in which to discuss important transport links and hubs.

As well as addressing the conference, Mr Hazzard has been meeting with the Transport Commissioner, senior commission officials and other EU ministers.

In a statement after the first round of conference meetings, Mr Hazzard said it's impotant to maximise every opportunity to grow and develop the Northern Ireland economy internationally.

This event, he added, is a unique platform on which to highlight key transport projects like the A5 and A6, as well as the Derry and Belfast Transport Hubs.